"I just want to create beautiful things, even if nobody cares" -Anonymous

'Round the Coop is Moving! 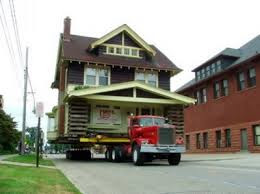 Please visit us at our new location...www.peinturestudios.com

Posted by Deborah Cooper at 8:35 AM 0 comments

That's right, Annie Sloan will be at Peinture Saturday, April 13th at 3:00 signing her new book "Color Recipes for Painted Furniture and More"! Then she will stay afterwards for a social hour where you can shoot the breeze(what does that mean anyway? You can shoot breeze?) with Annie and enjoy delicious tea served by the super cool Seventh Tea Bar and munch on some sweet nosh. Yum.

If you haven't met her, she's AWESOME.  But don't take my word for it, meet her for your self!! 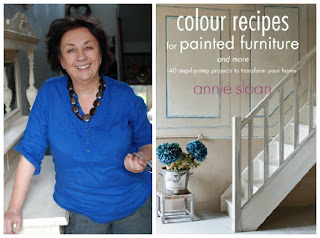 Peinture is located in the South Coast Collection(SOCO) in Costa Mesa, California. Just off of the 405 frwy at Harbor.

Never ceases to amaze me...


I swear, Chalk Paint™ never ceases to amaze me. Here's a shot from an interior design project I was working on. The client had a red cabinet with gold accents that she really wanted to a repurpose. 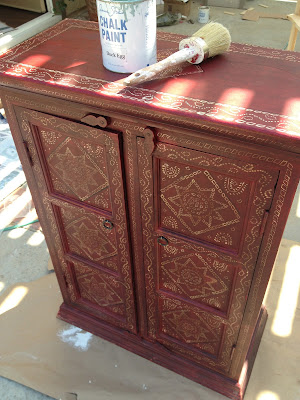 I agreed. But the new design scheme was softer... creams, blues, and neutrals. I decided to paint it with  Duck Egg Chalk Paint™. 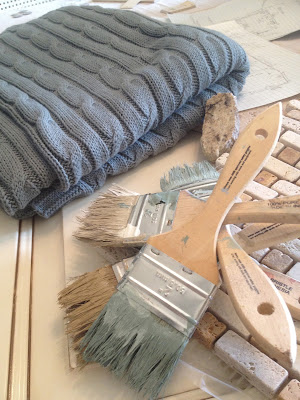 I really questioned how it was going to turn out and if the gold design would show through. But I grabbed the paint and went to it anyway. 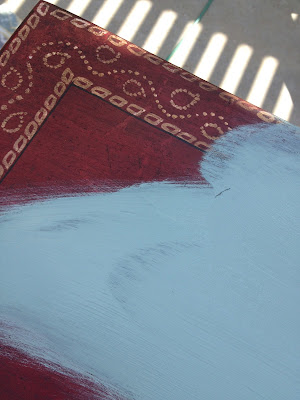 Not only did the gold pattern not show through, the paint covered in one coat! I then sealed it in Annie's clear wax followed by the dark. I even allowed some of the red to show through slightly in areas to add some interest. It turned out amazing! I think it literally took me only an hour. It was hot that day so the paint dried almost instantly. I waxed it right away and took it inside. Done. 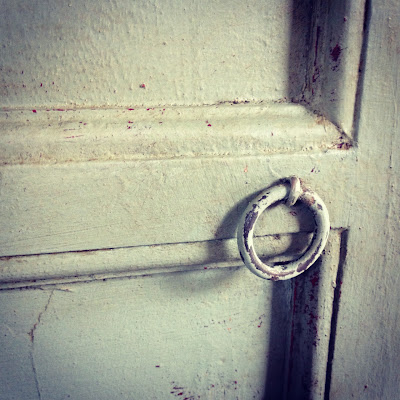 Today is the last day to take advantage of Country Roads Thanksgiving holiday sale. It's storewide, including 10% Chalk Paint™ and supplies! 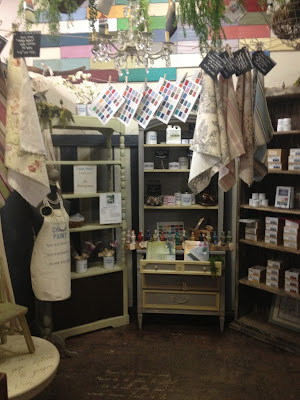 Their inventory is AMAZING, don't miss out!

Have a great one,

Posted by Deborah Cooper at 10:58 AM 0 comments

It's here! Annie Sloan has introduced her fabric to America. To make things a little easier, I've included what Chalk Paint™ colors I think go best with each pattern. Annie also has suggestions on HER website. All of the fabrics are factory direct from either France or Belgium.

First up is "Faded Roses": 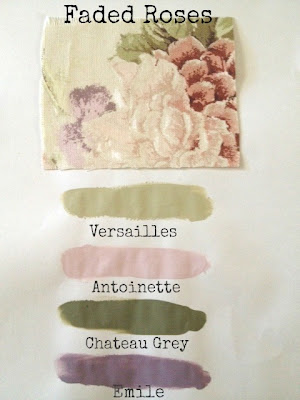 Beautiful. It's 100% cotton and 55" wide. Repeat is approximately 25 inches. I'm going to also tea stain this one and maybe even try bleaching it in the wash to make it look vintage! $41.00 per yard. 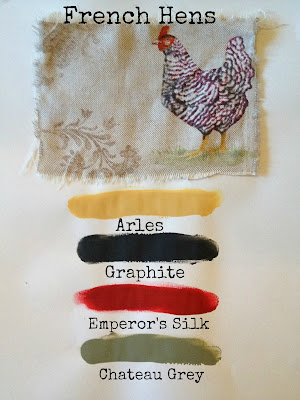 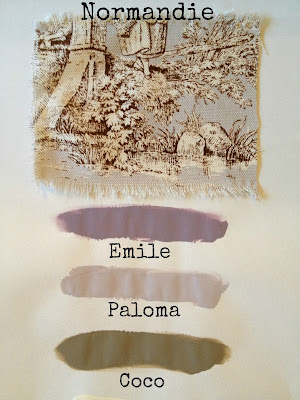 And now for "Charcoal Pastorale": 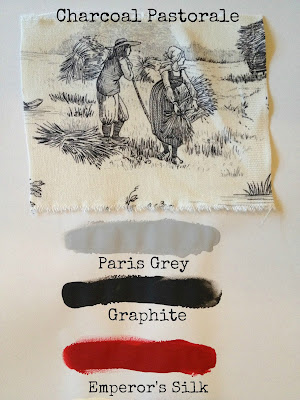 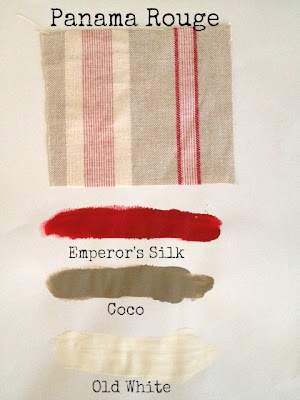 This great striped fabric is an amazing 108 inches wide and 100% cotton. 6 1/2 inch vertical repeat. Who doesn't love practically ready made drapery panels?! I just made over a footstool with this using Coco. Turned out fab. $56.00 per yard. This is a limited edition fabric! Use with "French Hens"! 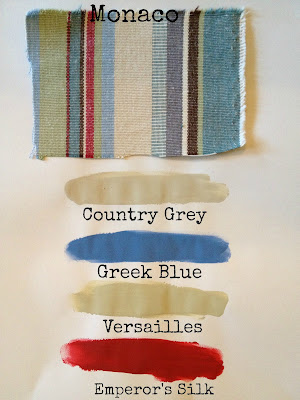 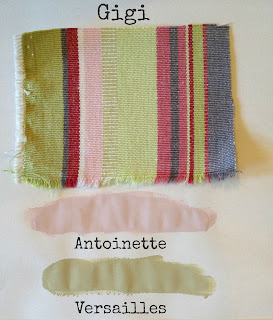 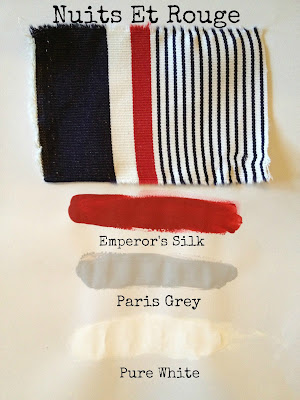 All of Annie's fabrics are available to purchase by the yard. I will have my samples in Country Roads tomorrow for all to see in person!

The Ultimate Before and After... with Chalk Paint™


Whew! What a project. I do LOVE me some Chalk Paint™ decorative paint by Annie Sloan! I was on a quest to try it on as many surfaces as I could. I pulled items that I had in and around my house(I'm an Interior Designer by trade, so I do have more things to play around with than the average homeowner!). After painting each item, I either used Annie Sloan soft wax or Annie Sloan Lacquer and some I left unsealed. I only painted half of each item so you could see the "before"(well, except for the paper book in the first photo). Shall we start? 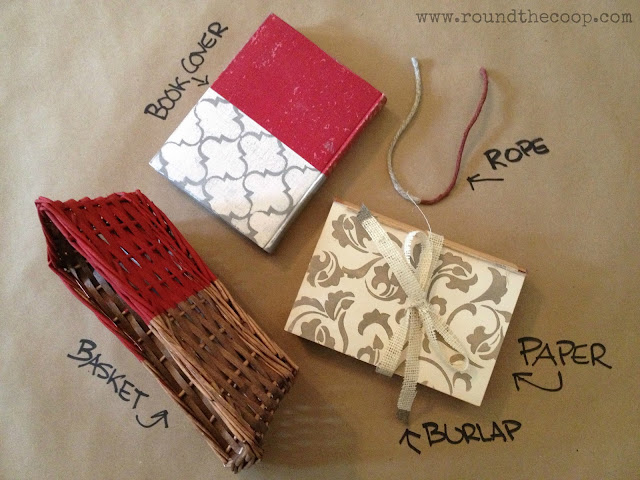 The basket is in Emperor's Silk, unsealed. The paper book with burlap bow was done in Coco, unsealed(a $1.25 project by the way! I'll post a tutorial on it soon. Stencil used was "Scroll-all-over" by Royal Design Studio). The book cover is in French Linen and Old White, sealed with clear and dark wax(Martha Stewart stencil). The rope was painted in Primer Red, unsealed. 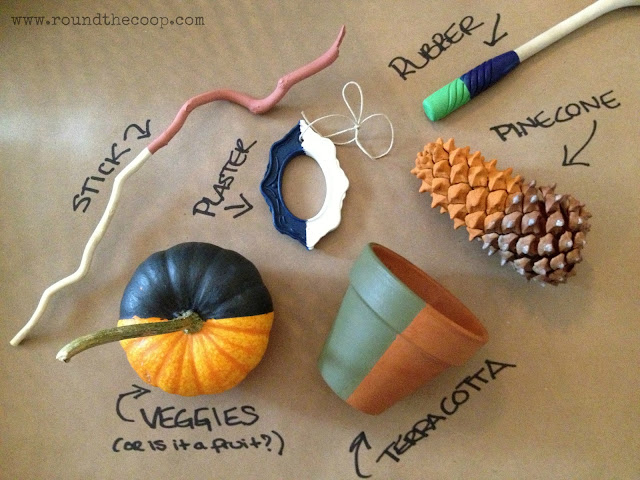 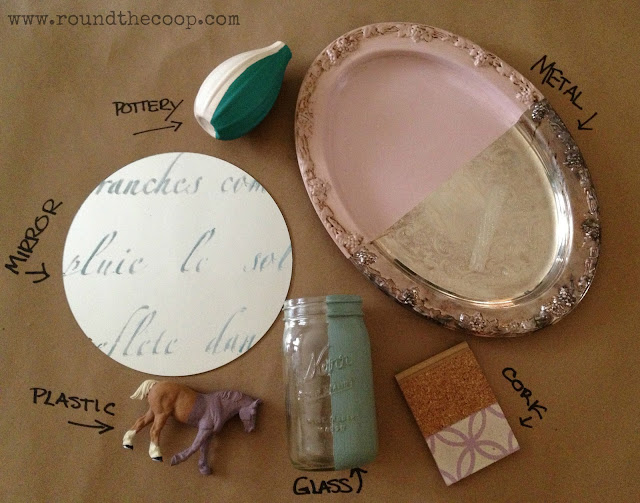 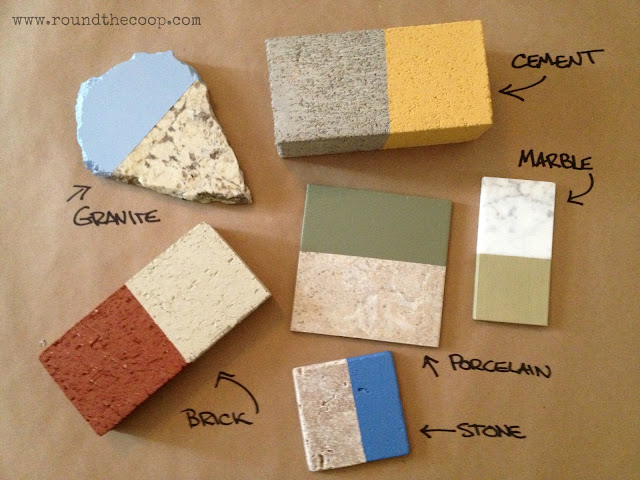 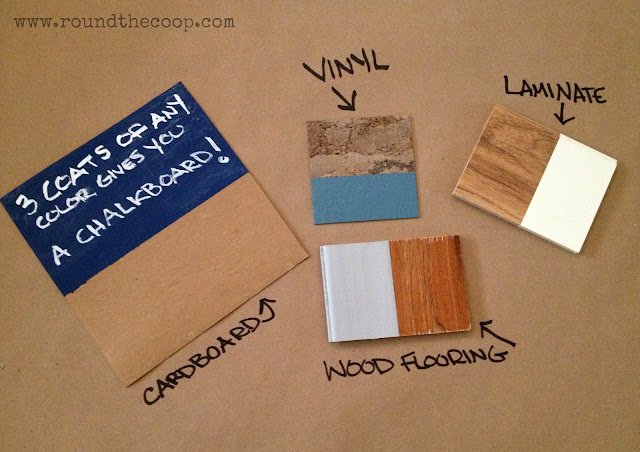 Cardboard was painted with Napoleonic Blue, 3 coats, unsealed. I always use cardboard to make my chalkboards! I grab a frame, paint some cardboard(allow to dry), rub chalk all over it, wipe it clean, and staple it to the back of the frame. Super easy! Wood flooring is Paris Grey, sealed with  Annie Sloan Lacquer. Laminate flooring was painted in Old White, also sealed with Lacquer(you can paint laminate furniture also! Seal with wax). Vinyl flooring tile was painted in Aubusson Blue, sealed with Annie Sloan Lacquer. 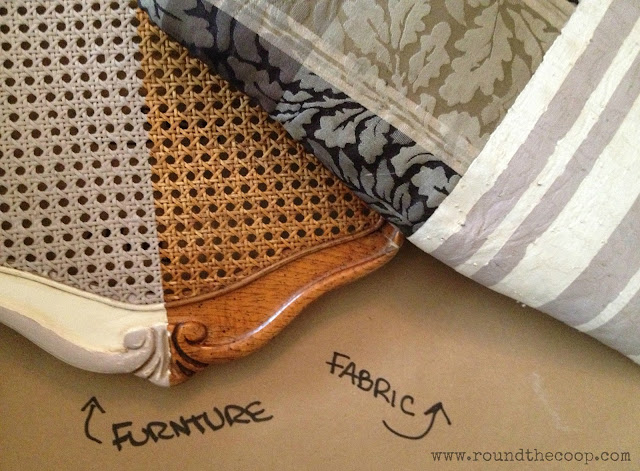 The wood chair was done in Pure White and Paloma, sealed with clear and dark wax. My chair happened to be unpainted(only stained and sealed), but Chalk Paint™goes over previously painted furniture also! Remember, NO PRIMING, NO SANDING. What a beautiful thing. And then there's fabric. Yes, you can paint fabric, also leather. It doesn't even get crunchy! The above fabric was also painted in Pure White and Paloma, sealed with a mixture of clear and dark wax.

Chalk Paint™ also goes on walls! I didn't have any spare drywall to paint a sample of, but believe me, it looks amazing. Velvety and smoooooth.

So why did I do this? To show all of you how truly amazing this paint is. Period.

Now it's your turn. Go create something beautiful, even if nobody cares.

The story of how Chalk Paint™ made it's way to the USA... 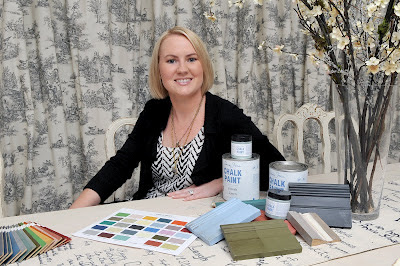 Here is a great post by Junk Bonanza on the story of how Chalk Paint™ made it's way to the great U.S. of A.  Lisa Rickert is the woman behind it all.

Look for the picture of the beautiful chandelier Lisa bought while she was in Orange County on a visit. She snagged it from Debbie Watts' booth at Country Roads Antiques & Gardens!

Looks AMAZING! In fact, her whole house is amazing. The beautiful look is all courtesy of Chalk Paint™ decorative paint by Annie Sloan. 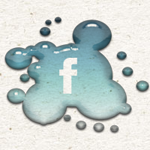 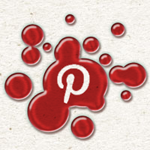 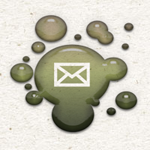 Deborah Cooper
I'm a Mom, Interior Designer, Furniture Groomer, and definitely a junk junkie. I LOVE to upcycle previously loved pieces and give them a spectacular new life! I am proud to say that I am also a retailer of Chalk Paint™ decorative paints by Annie Sloan. I'm always up to trying new experiences, so come along and follow me in my adventures! You ready? Let's go! Carpe Diem!

Sometimes it's okay to be a follower! 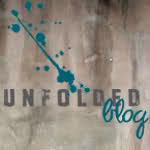 Enter your makeovers at....